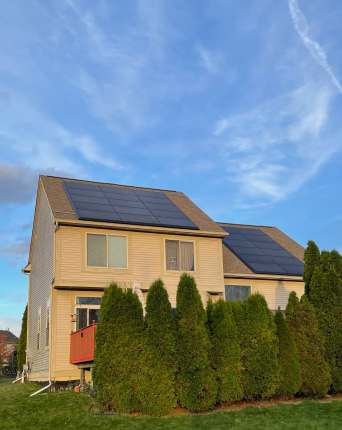 Let me tell you about my solar panels

Just in time for the shortest day of the year (in the northern hemisphere), my solar panels are live!

First off, solar panels make financial sense right now. I would see solar panels on people’s houses and wonder how much more people are spending just to lower their “carbon footprint” (a term made up by fossil fuel marketing to push individual responsibility for a shared problem). But it turns out panels are cheap. The technology has gotten way better:

When I say that they make financial sense, the payback period is roughly 8-12 years. Assuming no inflation or utility price increases, my system will pay for itself in about 10 years. There will be both inflation and utility price increases, so my break-even will be sooner (about 7 years if prices go up 5%/year). My system is also warrantied for 25 years at 85% production, and it almost certainly will last much longer than that. Over 25 years, I will save tens of thousands of dollars in electrical costs, and avoid putting about 18,000 lbs CO2 into the atmosphere.

If I decide to sell my house before I’ve recouped all my expenses, I will probably still come out ahead. In 2015, Lawrence Berkley Laboratory found that solar panels added $4/watt to a home’s value, although with the falling cost of solar I don’t imagine that number is still accurate. More recently, in 2019 Zillow found that houses with solar panels sell for 4.1% more on average. On the flip side, I recently asked an appraiser about it and she said that there are so few houses with solar panels sold that it makes it hard for her to justify raising her estimate.

Back to incentives, I want to call out a program that is available in Washtenaw County, run by the City of Ann Arbor called Solarize. They have a list of solar installers, vetted through the Michigan Saves nonprofit green bank, who have agreed to a flat group buy discount program. The idea is that a neighborhood puts together a group buy with one of their installers, and gets a 5% discount if 3 homes purchase, 10% for 7 homes, and 15% for 10 homes. If you live in Washtenaw County, Michigan and want solar panels, definitely check the Solarize page for any current group buys or hop on one of their Power Hour Zooms.

You can read another take on Solarize over at Damn Arbor.

Aside from the fact that this makes renewable energy cheaper, it does something that is arguably more important right now: it normalizes solar panels. If you see one solar panel in a neighborhood, that’s probably just a crazy tree-hugger with more money than sense. But when you see a bunch of homes with solar panels you start wondering “do solar panels make sense now?”

There was an episode of the Hidden Brain podcast that talked about a similar program in Germany:

So one thing that the German government did that was so clever is they started targeting neighborhoods and incentivizing homeowners to just install, within certain neighborhoods, solar panels on their homes. And this shifted the social norms within those communities and created kind of a social pressure on the neighborhoods to realize that this was actually normal in their community now, and then they voluntarily went and adopted solar panels. And the most remarkable part about this process is that it spilled over from community to community and neighborhood to neighborhood and wound up becoming the dominant social norm throughout Germany, that everyone was sort of expected to have these solar panels on their homes.

My friend Lauren and I organized the group for our neighborhood, which involved getting a lot of quotes and meeting with a lot of solar installers. Some were more expensive than others, some pushed batteries more than others, but none were particularly bad. We ran into some challenges but, in the end, our Solarize group resulted in 16 new solar arrays representing 114 kW of power!

Solarize is great, and I hope that other municipalities adopt similar programs.

The panels themselves are pretty boring. They are hardy and designed to withstand some pretty powerful weather. The most exciting thing (apart from the sense of smug self-satisfaction that causes people to write overly-long blog posts) is when the snow slides off in a mini avalanche on my deck. No real maintenance required, although you won’t want to replace your roof any time soon.

The install took 3 days due to weather, the slope of my roof, and the size of my system. Once the install was done, the county came out a week later to inspect it. Finally, DTE did their inspection and turned it on two weeks after the county inspection. The install started on October 29 and I got an email from my system to let me know it was live on November 25.

The system maxes out at about 9 kW. If you’re into the details, I have 27 340W Q.PEAK DUO BLK-G6 panels attached to Enphase IQ7+ Microinverters and an Enphase combiner. I can get all sorts of neat graphs in the app, and I’ll do a follow-up post once I get everything working in Home Assistant.

How I Get Billed

I get my grid electricity from DTE Energy, which defaults to about 50% coal. If you also get your power from them, consider enrolling in DTE’s MIGreenPower program, which (pre-solar) cost me $20/mo to ensure that my electricity was coming from renewables. I was skeptical of the program—companies are more than happy to monetize guilt—but a friend who is an environmental professional assures me that it actually does force them to use more renewables.

So how do the solar panels affect my DTE bill? Well, first off, we get both electricity and natural gas from DTE and the natural gas usage is not going to change in the near future (although I would very much like to electrify all the things and get rid of my natural gas furnace, water heater, stove, oven, and dryer).

For the electric portion, my house uses any solar power first before going to the grid. After that, any excess goes to the grid (as an aside: residential solar is extra effective on high demand days because it goes directly to my neighbor’s homes for their use and doesn’t suffer ~6.5% transmission loss). DTE will credit me for my excess at roughly half the cost it sells the electricity. Those credits then cover the cost of my nighttime and cloudy day usage. They also can be banked for a year so that my August production can offset my January bill.

This is a pretty recent change. A couple years ago you could get net metering, meaning that you paid for the number of kWh you got from the grid in a month, minus the kWh you produced. If you produced as much as you used, you wouldn’t pay for any electric generation. Under the new system, you need to produce about twice your grid consumption to break even.

On the one hand, DTE needs to pay for the shared infrastructure somehow. I still very much would like the grid to be maintained so I can keep getting power at night and on cloudy days. On the other hand, if you have a natural monopoly where you need everyone to chip in to maintain a basic utility, that’s a good case for the people owning it and maintaining it with taxes.

Under the new system, it can make more sense to hoard your clean energy during high demand by filling a battery or wasting the energy running a crypto miner, instead of reducing demand for fossil fuel generated power.

I did not get a battery. Based on the math above—that I can sell power for roughly half the cost I can buy it—the break-even on the batteries was roughly 10 years. Batteries have a limited number of charge cycles, the lifespan is about 8-12 years. So it did not make financial sense for me to buy a battery that would pay for itself roughly when it died.

Did you know that when the grid electricity goes out, so does the solar? That surprised me, and a lot of people I’ve talked to about this, and kind of feels a little unfair. When too many air conditioners take down the grid, you’d think the solar house would be sitting cool. But you can’t have the solar panels pushing electricity into “dead” wires or you put the technicians at risk. So the rule is that solar panels have to shut down when the grid loses power.

So if batteries are roughly break-even where I live, then the real advantage to them is that you can continue to power your home when the grid goes down. I am fortunate in that I don’t lose power very often so right now a home battery doesn’t make sense. I also know that there is a lot of focus on improving battery technology, so I would not be surprised if the math changes significantly in the next 5 years. Also, if DTE changes their rate structure for the worse, batteries may become more viable.

As an aside, I love the idea of utility-sized gravity batteries like Project ARES and Gravicitry. It feels very steampunk to store electricity in a bunch of train cars or a hoisted weight.

So… Should You Get Solar?

The finances change a lot depending on where you live. Also, for roof-mounted solar you will want to see how much sunlight your roof gets. You can use Sun Number or Google’s Project Sunroof to estimate:

If your roof isn’t great for solar due to shade or geometry, ground-mounted solar may be an option.

There are also a bunch of other things you can do instead of adding solar panels. Reducing your energy usage by insulating you house or using lower-power power things (LED bulbs pay for themselves in a year!) will reduce your carbon output.

Also check with your power company to see if they have a program like MIGreenPower, where you can request clean electricity. Yes, it’s all fungible, but they really do buy more power from clean sources when you sign up for it.

Ultimately the climate crisis is being caused by systemic problems. We have made car ownership mandatory for most of America. Michigan’s Department of Transportation measures its success by how many miles it can get people to drive. We can’t even let the free market try to solve the problem until we price the cost of carbon into everything. We can’t solve systemic problems with individual actions, but at least we can do what we can to try to stave off the worst famines, droughts, wildfires, refugee crises, and wet bulb deaths of the climate crisis.

4 responses to “Let me tell you about my solar panels”