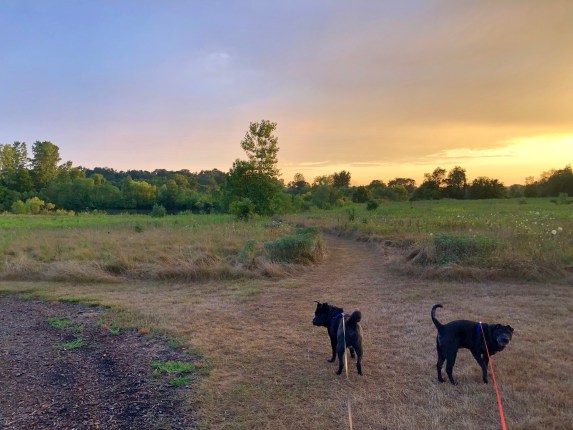 We had to say goodbye to Scooter on Friday. He was 13. It was a rough week.

We euthanized Yoshi in our home on Monday. That day Scooter started limping. It wasn’t anything new. He was part Shar-Pei and would get Shar-Pei fever from time to time. It would clear up in 24-36 hours and he would go back to normal.

Tuesday night we were concerned. Wednesday we took him to the vet, then the emergency vet. We tried heroics but, like most heroics, was more about trying our hardest than getting the outcome we wanted.

It seemed like it was neurological, like something broke when he saw Yoshi die. The dogs had been together almost every day for 12 years, so maybe Scooter couldn’t bear to be without his brother.

The dogs weren’t brothers, although people would ask. Scooter looked exactly like Yoshi in his adoption photo, and completely different in person. They were both Shar-Pei mixes but where Yoshi had bright ears, fluffy fur, and a Shar-Pei’s curly tail, Scooter had Shar-Pei’s covered ears, short coat, and a Pit’s long straight tail. Where Yoshi was aloof, Scooter was bursting with love; even by dog’s standards.

Scooter got his name from the rescue, and we couldn’t think of anything we liked better when he came home. Luckily he didn’t have a habit of scooting, and I only made the connection a few months after we got him. The rescue insisted on seeing pictures of the tall privacy fence in our backyard at the time. We found out why when he leapt the 3 foot gate to greet us in the front yard.

He was vocal, and we learned that he wasn’t growling but making playful noises. And he loved to play. He would chase and wrestle and zoom even in his senior years. Anything to get attention from the people he loved.

Losing one dog is a gut punch. Losing two in the same week has shocked our sense of home. It’s so much quieter in the house, despite having two kids under 10. We can enter the house without running a gauntlet of wagging tails. The robot vacuum is finally making progress in its war on fur. There’s no one to let out before bed, and I don’t need to lock the back door because it was never unlocked.

Scooter, you have left a hole in our family and we will always miss you.