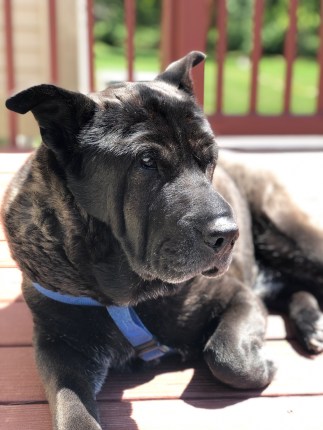 Our best guess is that Yoshi was part Shar-Pei and part Lab. He got his stubborness and curly tail from his Shar-Pei side and his shedding from his Lab side. He loved to curl up with his humans. It was an honor to wake up with him balled up in the crook of your legs or his head resting on your shin.

Yoshi came to our home on July 23, 2008. He was about 1 year old. At the time we had Buddy, an older full Shar-Pei. Having learned the health problems that come with a pure Shar-Pei we decided to adopt a mixed breed.

We were told that Yoshi was left chained up outside before being surrendered to the humane society where we got him. When we got him to our second story apartment, he froze when he saw the stairs. We had to carry a scared, unfamiliar, 55 lb dog up the stairs for the first few days we had him. He got the hang of it eventually.

We had a couch that backed up to a sliding glass door. Yoshi would perch himself on the back of the couch like a cat, or even stand on it to get a better view of what was going on outside. We joked that he must be part mountain goat.

He was always a bit leery of everything. He always had a wrinkled brow so he always looked worried, but if you watched his ears you could tell if he was excited or concerned. We kept his crate for him long after we stopped shutting the door. He always needed a safe place to be. After the crate he would always find corners and closets where he could relax while still keeping an eye on things.

When he would shed we made a game of gently pulling small tufts of fur that were sticking out, and marvelling at how much they bloomed into giant puffs. It’s dumb, but I think that’s part of being a family.

When he went deaf, we didn’t even notice at first. He was stubborn so not listening was par for the course. Once he stopped barking at the doorbell we knew his hearing was actually going, and I selfishly wished it had happened when we had napping babies.